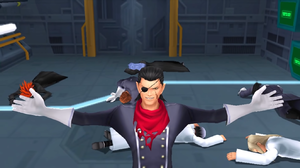 Braig asks Young Xehanort which of the former Organization XIII members shall be chosen to become Master Xehanort's next vessel.

In Ansem's computer room in Hollow Bastion, Braig, Dilan, Even, Aeleus, Ienzo, Isa, and Lea return to their human forms as a result of the destruction of both their Heartless and Nobodies. Everyone except Braig is unconscious; Braig speaks to Young Xehanort and deduces that the absence of Master Xehanort despite Xemnas's destruction means that the elderly Keyblade Master has already put his plans to form the Real Organization XIII into action. Braig is unsure of Master Xehanort's intentions, and Young Xehanort, who is also unsure, tells his accomplice that Keyblades are passed down by their wielders to their apprentices from generation to generation. Xehanort emphasizes the importance of his future Keyblade, No Name, and knowing that the weapon is somehow connected to the Keyblade War, Braig decides to accomplish his own goals. He contemplates who to take along with him, and Xehanort begins to speak Saïx's name.