The following content has been removed from Talk:Axel due to its irrelevancy to the article.

Even though it dosen't really make sense, I think Axel is Riku's nobody. This would make sense because if you look at all the pictures of Kingdom Hearts games you'll find something in common. When Riku, Sora and Kairi all stand by that one tree on Destiny Islands they always stand in the same order: Sora at the back, Kairi in the middle, and Riku at the front. Now I was saw a picture from 358/2 days that shows Roxas, Xion, and Axel all standing at the same tree in the same order. Plus Roxas and Axel are friends the same way Riku and Sora are. I know Riku turned into a heartless at some point so he has to have one. So basically we have instead of the order being Sora, Kairi, Riku; its Sora's nobody, Kairi's nobody, and then Riku's nobody?

They even have the same posture o.o

A little too off topic but i just want to say it; I think Terra is Riku's rebirth and I think Xion is definatly the nobody of Sora and Kiari because if you simply take the O from Sora's name and the I from Kairi's name and add an X then its Xion.

sorry to bother who ever may be reading this but I think there should be a section called "abilities" of "attacks" and under it should be a list of all axel's sleights in chain of memories. If there is no response I will try to make a list myself and add it here when its done so that then a member can add it to the page if they like but I tell you it will take ages for me to do it so perhaps you should get your guys on it. but only if you want.

This is just a thought, but could his original name possibly be Alex? ( nobody said it couldn't have an X in it already. )

Sorry, it was just a question, you didn't have to be so rude

I know, but I never said anything about actually posting it. besides you guys put a "possibly" on Larxene's name

It's also been stated that a Nobody name is the original name with the additional X, so only if his name had two X's could it have been Alex originally. The Patron Saint of Lost Causes 19:28, 10 March 2008 (UTC)

This is Axel's real name its Lea pronounced as "Lee".

Eh, well, we gotta have the link, and I've checked every single one of the interviews, and none of them said that, only the based-off Reno part, not the ale. Besides, Nomura probably wouldn't use an explanation for a name to be based on FF characters that some people who play KH wouldn't know about...XienZo 04:41, 9 August 2008 (UTC)

He is based off of Reno from Final Fantasy Advent Children. Beth B.

Axel was partially based off of Reno, as Tetsuya Nomura has already confirmed, because he wanted to "put a familiar character in an unfamiliar scenario". They are not related in any way other than that unless Tetsuya Nomura says otherwise. The only members whose names have even remotely been revealed are Xemnas, Xigbar, Xaldin, Vexen, Lexaeus, Zexion, and Roxas. As for the Larxene comment, the fact that some common names can be made from her name is just trivia, not speculation. Now listing all the possible names for her or any other member, that is speculation. LapisScarab 01:14, 31 March 2009 (UTC)

It is indeed true. Axel's Somebody name is Lea. Day 299 (Kingdom Hearts 358/2 Days). Saix calls Axel; Lea. I do believe it's pronounced "Lee" which in my opinion isn't feminine. I just played that part the other night. Trust me, it's true. It's not "Ale".

Yeah, mine is about Axel's name, his orginal self, just basically it does not have to be Axel rearranged with an x taken out, remember, he could've taken on that name or something much like that, like Xemnas did, as his real name is not Ansem but Xehonart. Just a thought is all 121.72.8.134 23:57, 17 May 2008 (UTC)

Yeah, mine is about Axel's name, his orginal self, just basically it does not have to be Axel rearranged with an x taken out, remember, he could've taken on that name or something much like that, like Xemnas did, as his real name is not Ansem but Xehonart. Just a thought is all 121.72.8.134 23:58, 17 May 2008 (UTC)

It didn't HAVE to go through the anagram thing. If he got permission from Xemnas and a good reason to. Last time I checked, they weren't on good terms, so it probably is an anagram. XienZo 00:52, 18 May 2008 (UTC)

I'm not sure, I don't have Final Mix but I think the Reaction only appears when you finish a combo, or when he hides in flames (Shrugs)

might be late but i meant when Axel hides in the flames.

Umm...I have a question:Is possible for humanoid Nobodies to...have kids?

I suppose the only things they're missing are hearts but.....

wow... what an odd question. uuummmmmm... my guess would be yes. Because in physically speaking, they have human bodies. but then agian, a Nobody child would has no heart, something needed for complete exsistance. But it would be a Nobody child, meaning it would never be complete in the first place.... my guess is still yes though. -xNaminéx

The only problem with the theory is that Nobodies are supposed to be nonexistent. What's more, they're created from the body of a strong-hearted person turned Heartless. If they wanted to reproduce, they could just throw people into the darkness. Keyblader 20:07, 7 July 2009 (UTC)

I don't think "Hell" counts as a swear. That's profanity, but not actual bad language.

I was very sad when poor Axel died. He and Roxas are the only members that don't desearve to die (dispite Roxas still being alive). Amalia 12:47, 15 March 2009 (UTC)

I wouldn't be amazed if Axel cussing is true, in my opinion Axel is probably the weirdest character so far.--PrincessAndie8thprincessofheart 18:01, 2 May 2009 (UTC)

It was when he used Namine to double-cross Marluxia and Larxene. The words were changed when it went to Re: CoM. Keyblader 20:09, 7 July 2009 (UTC)

"weirdest" would probably be Xigbar (or demyx).

It would be an honor to have characters in Kingdom Hearts share your username. I would be really pleased if they will have a character be called Princess Andie!--PrincessAndie8thprincessofheart 17:59, 2 May 2009 (UTC)

You're kidding me, right? You think that a board of Creators in Japan is going to say, "Oh, look! We can take these two random names from the internet! It works perfectly! And one of them even sounds like a common enough Japanese name! Doesn't this work so nicely?" Lose the sense of grandeur. Keyblade Mage 00:54, 28 June 2009 (UTC)Keyblade Mage

...no, your template code clearly states that it's yellow on lightred, which isn't a code-color, so it goes to white. I corrected it to "pink", but it's still pretty unreadable.

lea is just axel without the x and scrambled up...(i felt like i had 2 say tht^^) User:Ninabean822

well you know how some people class roxas or riku as emo (i h8 labeling btw, just stating a fact here) and they do all this fan

but seriously , if people actually thought about it, axel haas been through more shit than roxas yea roxas forgot everything; xion,axel,the organization ect.. but axel lost both xion and roxas only xion died i understand that hurt them both but roxas forgot and ansem , the selfish bastard desided to kill himself instead of helping roxas he could have thrown that "thingy machine" over the edge and lived but nooooo but i suppose it was better for axel to die tbh he needed it if you get what i mean i rambled yes....but it needed to be said xx

so tardy to this party.[edit]

I think Lea is a great name for Axel....or maybe I'm biased because my middle same is exactly the same

Why do we need a Lea page? All we know is his name and the fact that he knew Saix. The founding members are actually appearing and interacting with people; it makes sense for them to have pages, but Lea's would be like, two sentences long. Unless you just waste space by copying redundant information about Axel, which I see you did.—Urutapu 19:02, October 31, 2009 (UTC)

I Was browsing wikipedia the other day and came across this interesting tidbit of info. [2] in short a teardrop tatto has meanings accociated with death, this may imply something about Lea's past, mabey he was an assassin, and thats why he turned into a heartless, or it could mean something less sinister--Foutlet 23:07, November 28, 2009 (UTC)

The tattoos usually signify the loss of a friend or loved one. Interresting. Must mean Roxas and Xion, all right.--NinjaSheik 23:15, November 28, 2009 (UTC)

I've been reading this and whatching a looot of questions people has xD, so first I'm going to say something abut Axel's Somebody:

And for the end of this here I'll leave an image that proves the existence of Lea, Isa and their friendship: 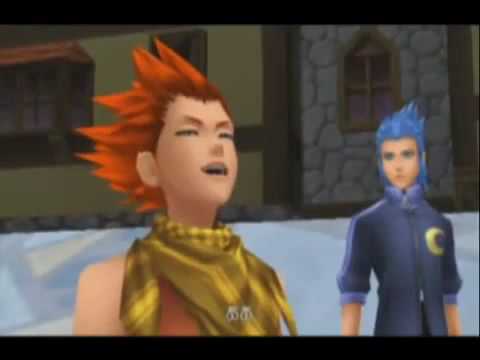