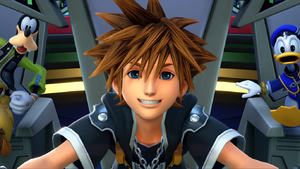 Having learned the role he unknowingly played in sealing Aqua's fate, Riku demands to know why King Mickey kept it secret. Yen Sid explains this was done to prevent Sora from attempting to rescue Aqua, and he reveals a safe means of entering the Realm of Darkness has been found. Riku and Mickey receive new garments made by Flora, Fauna, and Merryweather, and they depart to find Aqua and return her to the Realm of Light. Meanwhile, Kairi is instructed to train under the wizard Merlin so she can become a Keyblade wielder.

A short time later, Donald and Goofy reunite with Sora, who returns to Mysterious Tower after a prolonged absence. Sora is tasked with learning to retrieve lost hearts by Yen Sid, and he is told that almost becoming Master Xehanort's vessel has stripped him of many powers. Yen Sid reminds Sora of Hercules, who once lost and regained his godlike strength, and the Keyblade wielder departs with Donald and Goofy to pay the hero a visit.

Aboard the Gummi Ship, Sora and friends wonder how they will travel to other worlds, as the lanes between them have been resealed. Suddenly, Goofy remembers an old saying of Yen Sid's: "May your heart be your guiding key." Using his heart, Sora successfully opens a path to Olympus Coliseum.