Hello the community of Kingdom Hearts Wiki, and Fellow Kingdom Hearts Fans!!!, Obviously i'm a fan too of Kingdom Hearts, and a huge one at that. I have played every game to date, and plan on playing every future game. My other interests include final fantasy, the world ends with you, the dc universe but primarily batman and everything tron. I love kingdom hearts not only because it blends some very great things together, but also because of the story and universe in which you're transported to every time you play. My favourite game in the series so far is Kingdom Hearts II, but Birth by Sleep comes in at a close second. My favourite character in the series is Riku, as i really enjoy the journey he has taken over the series so far. Also because he is so bad ass and awesome!! My second favourite character and favourite villain is Xemnas. His voice and personality is just so awesome. Feel free to talk to me at my talk page and i will try my best to answer. Anyway take a look at my page, hopefully you think its up to standard!!! :D

"Riku... are you sure you're not jealous of Sora?" Xemnas

"As your flesh bears the sigil, so your name shall be known as that...of a recusant." Xemnas

"you could say, i'm the biggest nobody of them all" Riku

"Come on Sora! I thought you were stronger than that" Riku 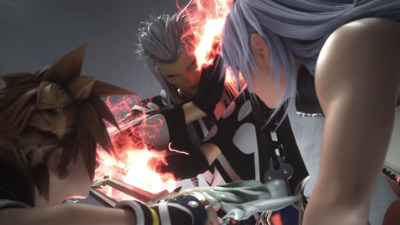 One of my favourite moments of the series