From the Kingdom Hearts Wiki: A world of information not accessible by Gummiship
< KHWiki:Trinity Archives
Jump to navigationJump to search

Thanks to the amazing work and desire from GrandmasterArcturus, the Kingdom Hearts Wiki and The Keyhole have launched their Let's Play series. This first episode, capping at only 32 minutes, features GrandmasterArcturus playing through the Dive to the Heart and discussing with Keyhole administrator Chainoffire. This first series will run through Kingdom Hearts Final Mix as featured in Kingdom Hearts HD 1.5 ReMIX. Be sure to go check out the video here, and subscribe to our channel for the latest episodes to this new series!

To celebrate the end of year, we begin the grand-scale End of Year Event alongside the Keyhole! The event has two competitions: a user trivia contest to test how well we know each other and a "Design-a-World" contest for all the creative souls out there! Get involved and participate in whichever one you fancy!

Cheers and confetti for the KHWiki's new administrator, KeybladeSpyMaster, who was elected as staff during November's roundtable! KeybladeSpyMaster has worked tremendously hard on the wiki and he shall continue to do so, no doubt!

Back from the past is the Kingdom Hearts Wiki's cleanup of the month! Our first cleaning project is the image renovation. Check out the forum to get started! Voting for September's cleanup can be done here. 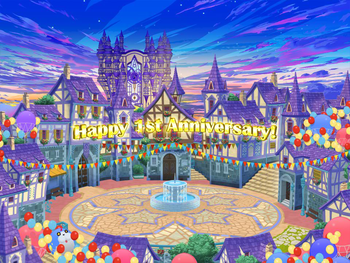 Today marks the one year anniversary of Kingdom Hearts χ! Check out the cool artwork by Tetsuya Nomura! New arrivals to Daybreak Town include Donald and Goofy!

We proudly present "Kingdom Hearts Wiki Community Portal 6.0!" Yes, I actually checked... After many years of attempting to get this project started, and a serious two weeks of discussion and work, the wiki's community portal, Traverse Town has finally been reconstructed to better serve the wiki's needs and be of better use to the community. Additions include the brand new 4th and 5th Districts, the Chain of Rewards, and the return of Clean-Up of the Month. In addition, a greater emphasis was given to community events such as the magazine and the Mirage Arena, and the entire 1st District has been dedicated to new and inexperienced users. The hope is that it will become of great use to not only new editors, but experienced and inexperienced editors alike.

We proudly present "Kingdom Hearts Wiki Main Page 2.0!" Okay, so maybe not exactly two... After a few months of planning and efforts, the main page has undergone a makeover. New additions include: a timeline of the Kingdom Hearts series complete with portals filled with information on each game; a countdown for Kingdom Hearts HD 2.5 ReMIX; and a proper portal for our community events. The Traverse Town portion has been redone in the image of our beginning Traverse Town reform. With another portion of our Mega Project: Arise complete, we shift our focus to the Traverse Town.

Have any questions/comments/concerns over the main page? Post 'em over here!

Amidst the festivities and Summer fun comes the revival of the Kingdom Hearts Wiki's Twitter account! Three new users have been charged with the upkeep of the account: Pea14733, KeybladeSpyMaster, and Xion4ever. We're currently working on new ways to use the account outside of Kingdom Hearts and Wiki news. Our first idea, "Guess That Quote," is already in motion! If you have any feedback or ideas on what we should post on Twitter, feel free to comment over here!

It's a time of great joy and success at the Kingdom Hearts Wiki. After several years of planning and drafting, and two months of constant discussion, the Kingdom Hearts Wiki, in co-operation and coordination with its sister wiki, The Keyhole, has launched the first issue of its new magazine and podcast! Set to release every three months, the magazine is packed full of information and fun, from the latest Kingdom Hearts news to current events here and at The Keyhole, to fun puzzles and challenges. The podcast, released in conjunction with the magazine, is packed full of fun discussion from our favorite staff members. It's all drafted, edited, and published by your fellow editors on both wikis. From both wikis, we truly hope all will come to read and enjoy the new magazine and podcast!

It's a time of happiness as the KHWiki has created even more bonds between other like-minded gaming sites! We have three new affiliations: the Kingdom Hearts Answers Wiki, a Q&A with a variety of broad topics, sevengamer, a German gaming portal that includes several Square Enix Wikis and an extensive forum board, and Hardyt3kyoyo, a YouTube channel that delivers "Let's Play" series for many games, including Kingdom Hearts!

A bit early, but we're not complaining! The E3 trailer for Kingdom Hearts HD 2.5 ReMIX has been released! Check it out here! We now have confirmed release dates for North America, Japan, and Europe audiences!: December 2nd for North America; October 2nd for Japan; and December 5th for Europe. Although Kingdom Hearts III isn't expected at E3, we aren't completely left in the dark. Indeed, squeezed in at the end of the Kingdom Hearts HD 2.5 ReMIX trailer is a brief scene. Two individuals are shown, discussing something about the "lost masters." Although leaving us with perhaps more questions than answers, this teaser only increases our eagerness for Kingdom Hearts III!

Blow out the candles, open some presents, it is our birthday! A bit late on the notification, but on April 1st the wiki celebrated another birthday! On this day the wiki turned eight! This is also our third birthday post separating from The Keyhole. A special thank you to all our editors and viewers! Your contributions are greatly appreciated! With your help the wiki gets better every year. Here's to another year of successful editing!

A recent article in Weekly Famitsu, of last week, revealed an interview with Tetsuya Nomura of the happenings regarding his employment in Square Enix along with brand new information on Kingdom Hearts HD 2.5 ReMIX and χ[chi]. According to the article, audio recording (voice, music, etc.) of HD 2.5 ReMIX has concluded, and Nomura is thinking of new scenarios for x[chi]. The game is slated for release in 2014, although 3 months have passed with no specific time-frame apart from the year.

We at the Kingdom Hearts Wiki would like to wish all our visitors and members a Happy New Year!

Robert Peeler, Community Manager at Square Enix of America, has confirmed the North American release of Kingdom Hearts HD 1.5 ReMIX! The release is expected for Fall 2013.