the info in this article is exactly the same as the info on the keyblade article, should we delete this or improve it? I don't know what else can be said anyways Pablo618 15:48, 23 January 2008 (UTC)

a link to the keyblade animation video (shrugs)

what about master xehanort and his apprentice?

Where are people pullin' out of their asses with these Keyblades bein' 'false' just because they don't have keychains? Didn't anyone bother to think that they just might be a different type of Keyblade instead?

No one has said that their Keyblades are fake. It is a theory that is largely backed by the fact that the Dark Keyblade used by Xehanort's Heartless, which is flase, lacks a keychain. Also, to the anon that started this, insuting and cursing does not make your argument any stronger. LapisScarab 18:07, 10 April 2009 (UTC)

Despite lackin' a Keychain, they can still perform the very same functions any other Keyblade can: opening up hearts and gateways to other worlds. Kaihedgie 03:02, 23 May 2009 (UTC)

though they haven't actually been seen to do that.(different anon)

there should maybe be a trivia about it's previous, chainless appearance.

Is it possible the 'keychain' is actually the good luck charm Aqua gave Ven and Terra? Because in other appearances it doesn't have a keychain. Just putting in my 2 cents. Adam 148 10:18, November 21, 2009 (UTC)

we have an article for Erauqs or whatever but none on Another No heart?

Why would we make an article on a character we know absolutely nothing about? We don't even know if he's a character or which one of the anagrams is his name. And why are you posting this on the page about the Keyblade belonging to Terra?—Urutapu 01:30, October 15, 2009 (UTC)

I was sarcastically speaking of Master xehanort and his apprentice and intended to post this in an above section. 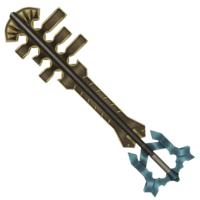 This image is not identical to what is seen in the available BBS scans, as explained in the forums. So, I'm leaving it here, where we can decide if and how we want to recycle it.Glorious CHAOS! 00:02, October 30, 2009 (UTC)

Problem is, are Terra's and ES's keyblades the same....

Indeed. I think this should go under Lingering Sentiment for now, and if Terra ever manages to possess a Keyblade which looks exactly like this, then we can put it in. But for now, I'm just supposing that this is only a prototype of Terra' Keyblade, and that that's the only mention it should get. TNÉ je t'♥ mélancolie ! 03:12, October 30, 2009 (UTC)