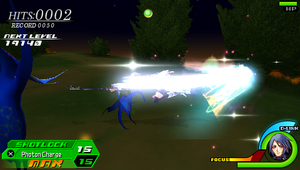 Photon Charge (フォトンチャージ, Foton Chāji?) is a technique that appears in Kingdom Hearts Birth by Sleep. The attack consists of cloaking the user in light and rushing at the targets.

In Kingdom Hearts Birth by Sleep, Photon Charge is a Shotlock that has a maximum level of 4 and max lock of 15. Once the attack has begun, the player can perform extra attacks by pressing

in the Japanese version) when prompted to pierce enemies with pillars of light.