"Hi, remember the 80's? You know, when ripping off Star Wars was still cool?"
I'm just a Kingdom Hearts fan trying my best to fit in.

I remember when I saw the commercial for Kingdom Hearts on Disney Channel, I was a HUGE fan Disney, I wasn't even into Square Enix (they were called Squaresoft at the time) yet. When I finally got the game, I was mesmerized, all I could ever think of was Kingdom Hearts. I Idolized Sora for who he is, and I also remember having a slight crush on Kairi. Kingdom Hearts was my very first RPG so it's kind of an important game to me, and even though I never beat the game until 9 or 10 years later, I loved Kingdom Hearts for letting me be a truly amazing character, allowing me to interact with my favorite Disney characters, and introducing me to a new kind of gameplay, Kingdom Hearts was the reason I became a fan of Final Fantasy.

For a time I was absent from Kingdom Hearts fandom, I don't what happened or why I stopped playing, but I eventually came back. But there were more times where I didn't play for a while; I was dealing with being bullied in middle school, seeking counseling for my neurodevelopmental disorder (Autism), then I had to focus on high school. But now I'm back, and more dedicated to Kingdom Hearts than ever.

I remember when I was younger I saw a girl reading a "Kingdom Hearts comic book", I assumed it was about Sora's youth because of the appearance he had in that book, looking back I probably should have asked her about it (we probably would've ended up being friends!), but I also remember doing something important. Years later, I was browsing through my high school's library and I actually came across the Kingdom Hearts Manga, the Tokyopop release. Naturally, I checked out the books and read them start to finish, then the Chain of Memories Manga, then some of the Kingdom Hearts II Manga (a couple of years after that I learned Tokyopop lost the rights to the Kingdom Hearts manga).

I Must Expand My Collection Or Die Trying

Thanks to the wonderful gift of Internet access, I was able to learn what I missed out on, and I became capable of online shopping. I decided I must try expanding my Kingdom Hearts collection my buying merchandise online or going to Texas Toyz. 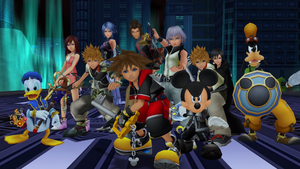 Which one's your favorite?

"I'm still kind of working on this section, but at least I'm being honest with everybody here."

"I'm just keeping my userboxes here until I find a better place for them."