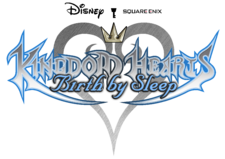 Kingdom Hearts Birth by Sleep is a Kingdom Hearts prequel for the Sony Playstation Portable (PSP). It was released in Japan on January 9, 2010, and it is planned to be released in North America on September 7, 2010 and in Europe on September 10, 2010. The game's name is shared with the secret video at the end of Kingdom Hearts II Final Mix, "Birth by sleep", which depicts a stylized version of a scene from the game. Kingdom Hearts Birth by Sleep was developed by the same team that created Kingdom Hearts Re:Chain of Memories. Like Kingdom Hearts and Kingdom Hearts: Chain of Memories, the main theme song for the game is "Simple and Clean", performed by Utada Hikaru. This game is the sixth in the series to be released, but is set first chronologically. The overseas release will include a number of new features, such as the Sticker Album, a new boss, new Keyblades, abilities, mini-game maps, and songs, and the addition of Critical Mode. (more....)