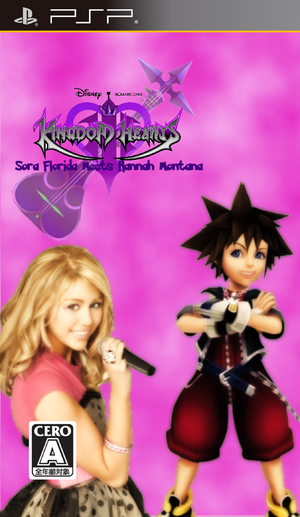 The rough cover design for the game, before someone at Square-Enix regained their sanity.

Kingdom Hearts: Sora Florida Meets Hannah Montana is a limited-edition, free crossover game demo that was distributed to promote Disney Channel's 2006 teen-friendly line-up, including the debut of their new series, Hannah Montana, as well as the release of Kingdom Hearts II.

Shortly before distribution, Square-Enix decided to withdraw their approval of the project, and the game was recalled. Tetsuya Nomura was later quoted as calling it "a disaster, a joke, and against everything we worked for. It didn't even reference Final Fantasy VII once, and you all know that I need to include those references in the Kingdom Hearts series." Several weeks later, he added, "We would afraid it would hurt sales with our more loyal and hardcore fans, despite their age demographic." A few of the discs had already been released to the media for previewing, as well as to testers for debugging. A couple had slipped out at least one known time during a major Square-Enix convention, making it a rare collectors' item. The game has had few appearances in public, but the first, and so far, only disc to appear on eBay went for $4,200. The status of the other discs is unknown, but it is rumored that Square-Enix has plans to pass the discs on to Disney for safekeeping, so that nobody would know of the terrible game demo they had created.

Sora is taking a nap on the beach of Destiny Islands when he hears a voice. He turns to see a pretty, brown-haired girl standing behind him. She asks him if he can help her, and introduces herself as Miley. Miley was about to perform at her opening tour concert when she fell through a dark portal and into Sora's world created by the darkness in her boyfriend's heart.

From there, Sora guides Miley through three small demo worlds, with enemies based on both Hannah Montana and Kingdom Hearts, as well as a few thrown in from other popular Disney Channel shows, such as The Suite Life of Zack and Cody and That's So Raven. The worlds themselves are based on Twilight Town, Beast's Castle, simply called "The Dark Castle", and the Coliseum portion of Olympus Coliseum, in which Sora and Miley can participate in the Best of Both Worlds Cup.

After arriving safely, Sora, in his new form (see Gameplay), rocks out with Hannah Montana at the opening concert, later deciding to tour with Miley across various other worlds such as The Tipton and Washington D.C., the latter of which is from Disney Channel's upcoming Cory in the House. Suddenly, the image fades; it was all a dream he experienced in Sora's sleep pod. He sees his friends Goofy and Donald in front of him, leading into Kingdom Hearts II....

Sora's task is to guide Miley through the three worlds back home in time for her concert. Miley does not attack, but offers healing and support spells. She also grants Sora the "Costume" ability, a foreshadowing to Drive Forms that allows him to change his "costume" into a powerful alter ego she dubs "Sora Florida". This changes his Keyblade into a powerful new form, roughly resembling something akin to Demyx's Arpeggio, as well as increases his magic abilities. Miley can also transform into Hannah Montana, which simply increases her magic ability with new spells based on her songs' titles. Because of the nature of the demo, there are only four spells available: Fire, Cure, Shield, and Rock Out!; the last of these spells raises Sora's attack stat while in his Sora Florida state.