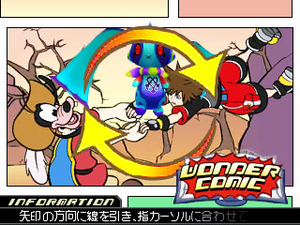 Wonder Comic in use.

Wonder Comic (ワンダーコミック, Wandā Komikku?) is a technique that appears in Kingdom Hearts 3D: Dream Drop Distance. It allows the user to perform an attack together with Mickey, Donald, and Goofy. Wonder Comic is the Reality Shift of Country of the Musketeers. 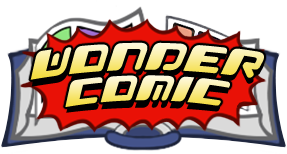 In Kingdom Hearts 3D: Dream Drop Distance, when activated, the target is dragged into a comic, where the player has to slide or touch the touch screen in three different panels to perform an attack. There are five panels, of which the fifth is exclusive to the battle against Pete and the Beagle Boys:

In Kingdom Hearts Dream Drop Distance HD, when activated, three of the panels appear on the screen at the same time, each having an arrow pointing in a random direction. The panels slowly fall toward the bottom of the screen, and the player has to move the left analog stick in one of the directions shown to perform the attack on the panel. When the panels reach the bottom of the screen, the Reality Shift ends. When activated in the battle against Pete and the Beagle Boys, the screen is filled with multiple copies of the same panel, each having two arrows pointing in random directions. To perform the action, the player has to move both the left and right analog stick in the directions shown.