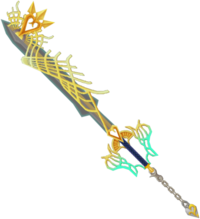 Recently featured: Land of Departure - Removed content in the Kingdom Hearts series - Another side, Another story...