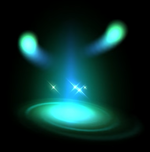 Save Points (also called Save Spots) are places within worlds that any playable character can use, with the exception of Sora's Heartless in Kingdom Hearts and King Mickey in Kingdom Hearts II. Upon standing on one, the player can save the progress they have made in their travels, fully restore their HP and MP, and in Kingdom Hearts, organize the party. Save Points are dispersed throughout the worlds, usually every three or four rooms (enemies such as Heartless and Nobodies usually do not spawn in these rooms), as a tracker. There are some exceptions, however, where rooms with Save Points may be infested with enemies—such as the Rabbit Hole in Wonderland and the Palace Courtyard in Castle of Dreams. This Save Point will not appear until all enemies are defeated. (more...)