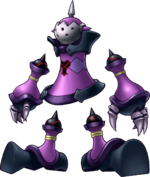 The Guard Armor is the leader of the Soldier-type Heartless, such as Soldiers and Large Bodies. The Guard Armor is the second boss of Traverse Town, as well as the first to be fought with Donald and Goofy in the party. It was sent to destroy the heart of Traverse Town, but was defeated by Sora, Donald Duck, and Goofy. A second one was deployed to guard the Traverse Town keyhole from Sora, Donald, and Goofy, but was defeated once more. The second one, however, had flipped upside-down and formed Opposite Armor.