The Caterpillar is a hookah-smoking caterpillar who resides in Wonderland. He makes a cameo appearance in the manga adaptation of Kingdom Hearts 358/2 Days.

During a mission with Luxord in Wonderland, Roxas encounters the Caterpillar in a garden. The erstwhile arthropod cryptically informs Roxas that the mushroom he is sitting on will make him grow shorter and taller, depending on the portion eaten, but before Roxas can get clarification on which side does which, the Caterpillar transforms into a butterfly and flutters away. Wonderland Gambler I 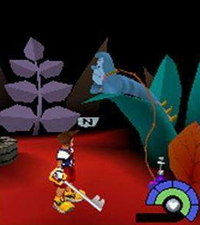 Sora talking with the Caterpillar in Kingdom Hearts V Cast.

The Caterpillar appears in Wonderland; similar to the Flowers that appear in Kingdom Hearts, he talks to Sora and triggers special events after he is given Potions.

The Caterpillar first appeared in the 1865 novel Alice's Adventures in Wonderland, which was later adapted by Disney into the animated film Alice in Wonderland. In the film, Alice discovers the Caterpillar in a field of mushrooms. The Caterpillar asks Alice who she is, but the confused girl is unable to answer him. The two get more and more frustrated with each other as they continue to converse; Alice eventually storms off, but the Caterpillar summons her back to him to tell her that she must control her temper and to ask her what her problem is. Alice offends the Caterpillar when she tells him she is tired of only being three inches tall (the Caterpillar's height); the Caterpillar loses his temper and transforms into a butterfly. He explains that eating mushrooms will allow her to change size depending on which side she eats.

Later, when Alice attempts to flee from the Queen of Hearts's castle, she runs into the Caterpillar once again. He demands to know who Alice is, rather than answer her when she asks him what she must do in order to escape.