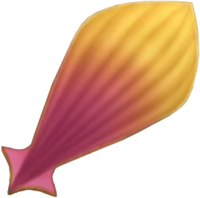 A Thalassa Shell left behind after Xion's demise.

A Thalassa Shell (サラサ貝, Sarasa Kai?) is a unique sea shell found only on the Destiny Islands. According to legend, sailors used them to make lucky charms that would ensure they had a safe voyage.

"It's my lucky charm! Be sure to bring it back to me!"
—Kairi gives Sora her good luck charm

In the beginning of Kingdom Hearts, Kairi begins to collect Thalassa Shells and make them into a good luck charm as sailors did in a legend she reveals to Sora to ensure that she, Sora, and Riku have a safe voyage as they travel on their raft to other worlds. After Kairi's rescue from Hollow Bastion and the return of her heart, Kairi gave Sora her completed Thalassa Shell Lucky Charm to bring him luck, but made him promise to return it to her.

As Sora trekked through Castle Oblivion, Naminé used her powers to morph Sora's lucky charm from one comprised of Thalassa Shells into one resembling a Paopu Fruit, coincidentally another item unique to the Destiny Islands. The lucky charm eventually retained its original form once Sora remembered that Kairi is the most important person to him.

Xion, a replica of Roxas with a strange resemblance to Kairi due to Sora's strong memories of Kairi, had a great fascination with Thalassa Shells. During many events throughout Kingdom Hearts 358/2 Days, the Thalassa Shell acts as a symbol of Xion's connection to Kairi. When Roxas suffered a coma, she surrounded him as he slept in his bed with Thalassa Shells amongst many others. After Xion escaped the Organization, Roxas was also seen to pick up a shell on the beaches of the Destiny Islands as he thought of his friend during one of her nightmares. A single Thalassa Shell is also all that's left at Xion's death.

After his seemingly final quest, Sora was reunited with his friends Riku and Kairi. After the defeat of Xemnas, he was able to return the Thalassa Shell lucky charm as promised to Kairi.

After reading King Mickey's letter, Sora decided to embark on yet another quest to reconnect with those once connected to him. He apologizes to Kairi, who hands him the Thalassa Shell lucky charm, saying that she'll see him soon.

Thalassa, in Greek mythology, was the primordial goddess of the sea, and the personification of the Mediterranean.