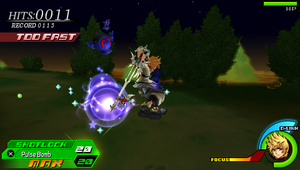 Pulse Bomb (パルスボム, Parusu Bomu?) is a technique that appears in Kingdom Hearts Birth by Sleep. It allows the user to charge balls of energy at the tip of their Keyblade and bombard targets with a series of small explosions.

In Kingdom Hearts Birth by Sleep, Pulse Bomb is a Shotlock that can be used exclusively by Ventus. It has a maximum level of 5 and max lock of 20. Once the attack has begun, the player can increase the number of explosions by pressing

at the indicated times.

This article about an ability is a stub. You can help by expanding it.
Retrieved from "https://www.khwiki.com/index.php?title=Pulse_Bomb&oldid=708422"
Category:
Meta category: