From the Kingdom Hearts Wiki: A world of information not accessible by Gummiship
< KHWiki:Trinity Archives
Jump to navigationJump to search 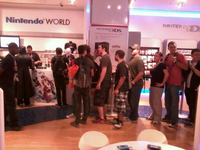 All coolness aside, this is what they're here for.

I just got home from the Kingdom Hearts 3D launch event at Nintendo World, and it was amazing, guys.

I made it to the Nintendo World store just as the doors were opening, so I passed by the entire line at its longest. It stretched around the block for nearly three sides, and the fans all seemed really excited. There were also a lot of cool cosplays there; I saw Final Form Sora, Roxas, Rhyme, and even the unnamed Heartless from Birth by Sleep Final Mix! Coolio. Plus, I got to meet up with other fansite owners, like Shamdeo from KH Insider and EnixHearts from Enix Hearts.

When you got in, you immediately see that they've decorated the entire store to look like you're inside the box art. The ceiling was covered with art based on Destiny Islands' sky, while the walls and even the elevators are decorated with the familiar "falling Sora, rising Riku" artwork. There are also several television screens up broadcasting one of the longer trailers, that one where it shows Sora summoning all the lost friends. Meanwhile, the sound system played through the entire KH3D soundtrack; I had to tune out and focus on the music when they played awesome tracks like Twister or Night on Bald Mountain! But my favorite part was the display they had up to showcase all of the Nintendo KH games, as well as some figurines, one of the novels, and the Tokyopop manga.

The line fed past the demo counters (which had the SDCC demo set in Country of the Musketeers, as well as a full version of the game for sampling), and after the fans bought their games they could get their photograph taken with a Kingdom Key prop in front of a KH3D backdrop; my favorites were definitely when some cosplayers came in with Keyblades they had made themselves and got some dual-wielding action in their photo! After that, the line fed past a raffle counter, where you could try to win a KH3D-themed shirt, as well as write a message to the Kingdom Hearts team; I was told that each message will be translated and taken to the Japanese SE office so that the developers can read it, which is awesome! (I asked for more Hollow Bastion) Then, you could either leave the shop, or sit down at the play table in the middle of the room and hang out with the other fans. Near the end, the line got so long, due to everybody wanting to get a photograph and win a shirt, that they had to wind it up the stairs to the second floor! I did try to take an interview at one point, but the main thing I learned was, yeah, everyone loves Flowmotion. It's super sweet.

If you're in the New York area, I would definitely suggest visiting the Nintendo World store before they take the decorations down; it's a one-of-a-kind experience. And if you managed to make it to the event on Saturday, give a shout out! Maybe I saw you there.