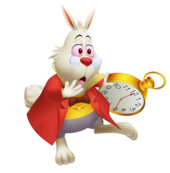 The White Rabbit is a minor character who inhabits Wonderland, serving under the short-tempered Queen of Hearts. He often carries around a large stop-watch, even though he is constantly late.

His role in the Kingdom Hearts series is to royally introduce his queen, blowing his trumpet to signal the beginning of the usual Wonderland trials. (more....)