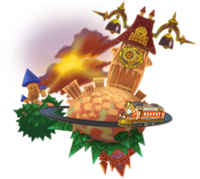 The Simulated Twilight Town is a world that appears in Kingdom Hearts II, and makes a brief appearance in Kingdom Hearts 358/2 Days. It is a false Twilight Town created by Ansem the Wise as an attempt to keep Roxas contained, while also throwing off Organization XIII. It was created using the same technology Ansem used in Radiant Garden's Space Paranoids,[citation needed] and can be entered by similar means. It is a nigh-perfect recreation of the real Twilight Town, as it has some glitches in the form of the Seven Wonders of Twilight Town. Ansem even recreated every resident of the town, using data samples of each person's heart in the real town. Although keeping to their usual attitudes, they do mostly act under Ansem's influence, though he is unable to completely control them. (more...)