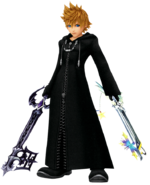 Roxas is Sora's Nobody, his name being an anagram of Sora with the letter X added. Prior to the events of Kingdom Hearts II he was the thirteenth member of Organization XIII, and bore the title "Key of Destiny". He was also the mysterious hooded figure in Another Side, Another Story as well as in Deep Dive. Before his name was revealed, he was often known as the "Blond Haired Kid" or "BHK". Some fans speculated that he was Tidus.

In the upcoming game, Kingdom Hearts 358/2 Days for Nintendo DS, Roxas will be the main character. This game will focus on the time period between Roxas's birth and his departure from the Organization. (more....)