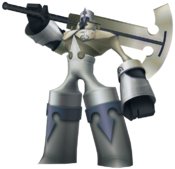 The Berserker is a high-ranking Nobody controlled by Saïx that is found in Kingdom Hearts II. The Berserker has a well-muscled, bronze-colored upper body, with thin upper arms. Its forearms are mostly covered in large, cylindrical, silver gauntlets, while its blocky hands are black. Its waist and upper legs are silver, while its lower legs are cylindrical and grey. The silver and grey halves of its legs are separated by a steel blue knee brace. Its head is rather small, black, and cylindrical. It wears a silver helmet on its head, which also sports a small, steel blue diamond on its front. A silver Nobody symbol is placed on its left pectoral muscle. It wields a large, bronze, T-shaped claymore with a long, black handle as a weapon. Like all other Nobodies, Berserkers have astounding levels of flexibility, and they also have the somewhat unique ability to shrink drastically in size. (more....)