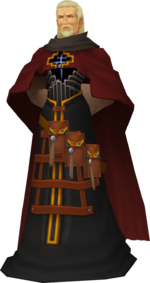 Ansem the Wise is the sage-king of Radiant Garden during Kingdom Hearts Birth by Sleep. In order to protect his people from the darkness, he spent much of his time studying the heart with his apprentices, Braig, Dilan, Even, Aeleus, Ienzo, and Xehanort, but was eventually exiled to the Realm of Darkness when they were corrupted by that same darkness. He himself gained dark powers, renaming himself DiZ, short for "Darkness in Zero", and setting out on a quest to avenge himself against his apprentices. (more...)