We don't usually keep real-life events as articles so I don't see why this remains an exception. TheFifteenthMember 11:57, 3 August 2014 (UTC)

On that note, I took the initiative of deleting the article. The wiki never covered real-life events. It's been brought up several years ago, and since no one has made an objection, I've deleted.--NinjaSheik 19:53, 1 December 2016 (UTC)

Where is this policy stated? My recollection is that at a past roundtable, we had explicitly decided to start covering events."We're werewolves, ﻿not swearwolves." (KrytenKoro) 19:04, 5 December 2016 (UTC) 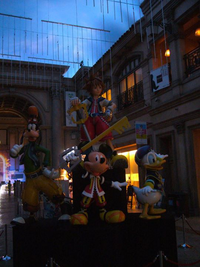 The statue featured at the event.

The 10th Anniversary KH3D Premiere Event was an event hosted by Square Enix to celebrate the tenth anniversary of the Kingdom Hearts series and the then-upcoming release of Kingdom Hearts 3D: Dream Drop Distance. It was held on March 3, 2012 from 1:30 to 6:10 JST at Odaiba's Venus Fort in Japan.

This article is a stub. You can help by expanding it.
Retrieved from "https://www.khwiki.com/index.php?title=Talk:10th_Anniversary_KH3D_Premiere_Event&oldid=773821"
Meta categories: