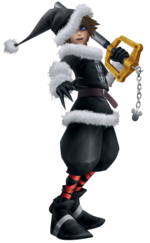 In Halloween Town, Sora takes on the appearance of a vampire. However, in Kingdom Hearts II Final Mix, whenever he appears in Christmas Town, Sora's attire changes to a black Santa Claus outfit, known as Santa Form.

In his Santa Form, Sora retains the dark, ashen physical appearance, boots, pants, and leg wrappings from his Vampire Form. The rest of his clothing, however, changes radically. His mask is replaced by a large, black hat with a white fur rim and a puff ball on the tip, similar to Santa Claus's, that is pulled over the right half of his face. (more...)