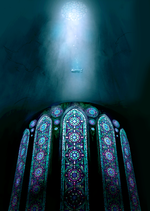 The Awakening or Dive into the Heart is a location which appears in Kingdom Hearts and Kingdom Hearts II. It is framed as a world within a dream, though the events which occur within it have a real effect on the waking world, and in one instance they are actually observed by outside forces. In terms of gameplay, the purpose of the Awakening is to serve as a tutorial level, where the player will learn the controls of the game, choose how their character will grow, and fight their first boss. The player is guided through the Awakening by an inaudible, unseen "voice" whose identity is uncertain.

To reinforce the dreamlike setting of the Awakening, Sora and Roxas both reach it by falling into an ocean. However, instead of drowning they find that they can breathe, and land upon an ocean floor which erupts into doves, revealing the Awakening. In Roxas's case, this first Awakening is merely a memory of Sora's, and he enters his true awakening three days later. (more....)