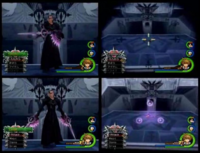 The Japanese release on the top, North American on the bottom.

When Kingdom Hearts II was released in North America, one of the main changes in the game was made to Xigbar. As noted above, in the cinematic before the fight, Xigbar combines his two guns together to make a sniper rifle. He uses this move later on in the fight as well. Due to restraints on video game violence, this was changed in North America. Xigbar no longer created his sniper rifle, and instead, simply spun his guns around, using one gun as a balance to steady the gun with which he sniped. The first person HUD display was changed as well, to make it less realistic. Xigbar's sniper rifle was later brought back for Kingdom Hearts II Final Mix, despite keeping many changes from the English versions. Interestingly, the Japanese HUD display is decorated with a black silhouette of Xigbar's individual Arrowguns in each of the four cardinal directions.

Will there be a difference in the bbs North American version of the game in Braig in the boss fight with Terra? Edgeshadow

in the japanese version when you fight him he start off with his gun going into a crosshairs, but in the english release it become some kind of purple triangle with circle thing, so just like xigbar, do we need a pic showing the difference?

I will try to upload a picture of the difference tomorrow.

srry im still new and still trying to figure how this all work. - UnkownChaser

I uploaded a video of the fight with Terra in English and it was removed, any idea why? It says that we need one. LightoftheDarkness 22:53, November 3, 2010 (UTC)